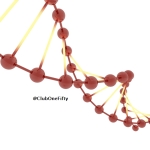 Telomeres are protective strings of DNA that cap the ends of chromosomes. Over time, cell division and oxidative attacks cause telomeres to shorten. There is a connection between short telomeres and cellular aging; when telomeres reach a critical shortness, cell function is impaired and eventually, cells die. Scientists have found links between short telomeres and smoking, obesity, diabetes, high blood pressure, cancer, heart disease and susceptibility to infectious diseases.

Studies also show a correlation between psychological stress and short telomere length. Steptoe and his team wanted to understand why this correlation exists. They were particularly interested in an enzyme called telomerase (TA). This enzyme makes telomeres longer. It becomes more active in times of acute mental stress. Short telomeres and high TA activity could be a sign of a stressed system.

Psychological testing showed that men in the short telomere/high TA group were more hostile and less optimistic than other men. They also had less social support. The researchers think these men found it harder to recover from stress because they were carrying a high allostatic load. That is, chronic stress had caused the their regulatory processes to become disturbed.