An organism’s awareness of itself and its environment depends on communication between one part of its body and another. We humans use mechanisms involving chemistry and electricity for communication.

The nervous system is our body’s electrical communications network. The system generates and transmits information throughout the body in the form of electrical impulses. The nervous system’s structures reach into every organ and participate one way or another in nearly every physiological reaction.

The nervous system has three jobs to do:

The nervous system is made up primarily of two categories of cells, neurons and neuroglial cells, that associate very closely in the brain and in tissues called nerves.

A neuron is an individual cell and is the basic unit of the nervous system. Neurons are highly specialized for the initiation and transmission of electrical signals, the impulses. The neuron is able to, in an instant, receive the outputs (electrical) of many other cells, process this incoming information and determine whether to generate its own signal to be passed on to other neurons.

Various types of cells, called neuroglial cells, support neurons in various ways, e.g. physically holding them in place and supplying them with nutrients. They protect neurons from pathogens and remove dead neurons.

A nerve is a bundle of peripheral axons. An axon is the long thread-like part of a nerve cell along which impulses are conducted. An individual axon plus its myelin sheath is called a nerve fiber. Nerves provide a common pathway for the electrochemical nerve impulses that are transmitted along each of the axons. 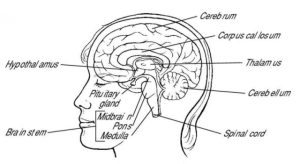 Aging and the Brain

All brains experience change with aging. Some of these changes can begin around age 30, with more significant changes setting in later in life. A combination of both natural and age-related changes contribute to brain changes. The brain will naturally eliminate the least necessary synapses, keeping those that are more important. Also, as the brain ages, such factors as injury, stress, and oxidation lead to changes within the brain. Despite a widespread belief to the contrary, the brain keeps all its brain cells and can even continue to create new ones throughout life.

The aging brain can continue to grow and learn through a process called plasticity, that is a natural creation of neural pathways in the brain. After age 50, most people’s cognitive function begins to decline. By encouraging brain plasticity, we can help combat that decline. Keeping our brain active and challenging ourselves to continually learn new things promote the natural plasticity in the brain.

We suggest doing many of the brain workouts that are available to Club One Fifty members.

Dementia is not necessarily a normal part of aging. In fact, dementia is rare before age 65, with only a few percentage of those aged 65 experiencing dementia. The most common form of dementia is Alzheimer’s. Vascular dementia, or dementia caused by a stroke or a series of small strokes, is also a fairly common type.

The central nervous system consists of the brain and the spinal cord, and is the largest part of the nervous system. It integrates the information it receives from sensory receptors and coordinates the activity of all parts of the body.

Blood entering the CNS must pass through the blood-brain barrier, which limits the entry of certain blood molecules into the CNS. The barrier restricts diffusion of bacteria, protecting the brain from infection.

The peripheral nervous system consists of the nerves outside of the brain and spinal cord. Unlike CNS, the PNS is not protected by bone or the blood-brain barrier, leaving it exposed to toxins and mechanical injuries.

The somatic nervous system regulates activities that are under conscious control. Its sensory fibers receive impulses from receptors. Its motor fibers transmit impulses from the CNS to skeletal muscles to coordinate body movements.

The autonomic system controls internal organ functions that are involuntary and that happen subconsciously such as breathing, heart beat and digestion.

Alzheimer’s is a type of dementia that causes problems with memory, thinking and behavior. Alzheimer’s is a progressive disease, where dementia symptoms gradually worsen over a number of years. In its early stages, memory loss is mild, but with late-stage Alzheimer’s, individuals lose the ability to carry on a conversation and respond to their environment. Alzheimer’s is the sixth leading cause of death in the United States. Those with Alzheimer’s live an average of eight years after their symptoms become noticeable to others, but survival can range from four to 20 years, depending on age and other health conditions.

Alzheimer’s has no current cure, but treatments for symptoms are available and research continues. Although current Alzheimer’s treatments cannot stop Alzheimer’s from progressing, they can temporarily slow the worsening of dementia symptoms and improve quality of life for those with Alzheimer’s and their caregivers. Today, there is a worldwide effort under way to find better ways to treat the disease, delay its onset, and prevent it from developing.

A stroke is damage to the brain caused by reduced blood flow (ischemia) or bleeding (hemorragia). Whether ischemic or hemorragic, some brain tissue dies or is irreversibly damaged. Disability following a stroke may be mild or damage may be severely disabling, both physically and mentally. Stroke is a common cause of death among elderly.